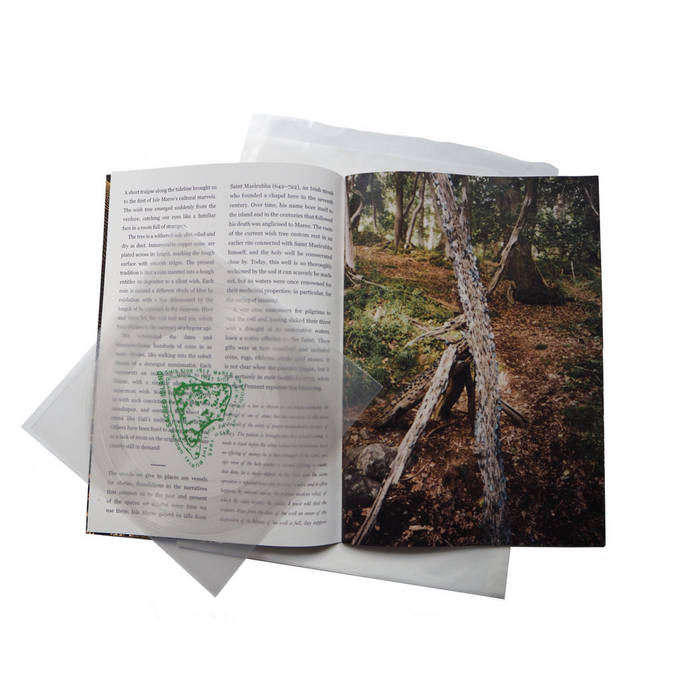 In the early spring of 2016, Folklore Tapes researchers Ian Humberstone and Jordan Ogg left Edinburgh for the grey mountains of the Cairngorms. At Inverness, they took the road west to Glen Docherty and from there gazed across the crystalline waters of Loch Maree. Sixty-four islands decorate the loch’s surface, and hidden among them is a jewel like no other, a verdant haven brimming with enough lore to fill the library of any old Highland mansion.

Isle Maree is small and seldom visited, but it has played host to a remarkable array of rites and wonders. Its shores remember Druid sacrifices, Saintly deeds and solemn funeral processions. Its soil holds Viking graves, a wish tree studded with ancient coins, and the vanishing traces of an enchanted well. Even the waves that lap against its shingle beaches are rumoured to harbour a revolting primordial beast.

Sacred Island delves into these mysteries, making use of little-known Victorian sources and contemporary interviews to unfurl the isle’s tangled history. The project booklet is illustrated by film photography from the expedition and hitherto unpublished archival images. The flexi-disc features music for analogue synthesizer and symbolic action – pennies rubbed together, tuned water drums, and looped chimes half submerged in various liquids. These audio motifs are binded by tape-affected spoken word travelogues and graveyard field recordings from the hallowed retreat. A chemically treated patina coin completes the set.

To set foot on Isle Maree is to be spellbound by beauty and tranquility. To leave is to carry home the feeling of having only scratched the surface of its secrets. This island is a beguiling riddle whose solution may never be known.

Sacred Island is a collaborative work with the Island Review (www.theislandreview.com) completed with support from the Gairloch Heritage Museum (www.gairlochheritagemuseum.org).

"another marvel [...] once again, the team at Folklore Tapes has underscored the vibrancy of history, rescuing local lore before it oxidizes like copper." A Closer Listen